Ancient Greece is generally thought of as the birthplace of philosophy, democracy and Western culture, but the ancients had many ideas related to both human nature and politics that our culture has no concept for. For one thing, the ancients believed that the individual and the state were inextricably linked, that as Plato put it, the state is merely “man writ large.”

From here, the problems of politics are seen as comparable to the same psychological hazards faced by every individual. According to Plato, a delicate balance between the mind, body and spirit is the cure for individual dysfunction, and a delicate
balance of rulers, workers and military is the cure for political dysfunction, where each performs its own function, without trying to take over the
proper functioning of another part of society or self.

Here are a few other useful ideas that the Ancient Greeks utilized, that we have no words or social concepts for.

Telos is the belief that man has a definite goal and purpose in life that is characteristically human. This belief holds that all of society should be set up so as to assist people in discovering and achieving their personal telos.

Eudaemonia is the target of the telos. It is most often translated as “happiness,” but a better word would be flourishing, as the Greek ideal implied a person functioning
at their personal best and living an excellent life. This was the
purpose and gave meaning to human life in ancient Athens.

Hubris is extreme arrogance or pride, and is one of the worst vices. It is always the cause of tragedyin ancient dramas, and is the tragic flaw of many heroes. It is always
punished by the gods.

Arête is often translated as excellence or valor. It originated to describe courage in battle, but was expanded to mean all types of human excellence, which were believed
to be interdependent. In fact, all the virtues were believed to be interconnected. It is through practicing Arête that you achieve Eudaemonia.

Pleonexia means over-reaching ambition or greed. This is also a serious vice punished harshly by the gods. The ancients hated extremes and strove for balance, harmony, excellence and beauty. They intentionally set up their society to
create excellent and happy citizens capable of governing themselves, believing this
would create an excellent and happy society. We still marvel at their political theory, art, drama, and architecture, the depth of their thought and the surprisingly scientific understanding of some of their philosophers.

The two guiding principles of the ancient Greeks were: Know Thyself and All Things in Moderation. This is the system that the Founding Fathers used as a model in creating the United States, but is mostly forgotten now. It could benefit us all to rediscover some of these ancient Greek concepts now.

A Glimpse at Some Ancient Greek Concepts

Seeking Wisdom: or, Looking for Socrates in All the Wrong Places 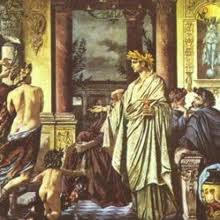 A Glimpse at Some Ancient Greek Concepts

Seeking Wisdom: or, Looking for Socrates in All the Wrong Places